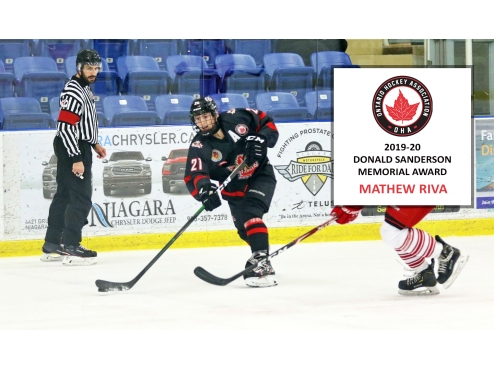 CAMBRIDGE, Ont. – The Ontario Hockey Association (OHA)  is proud to announce that Niagara Falls Canucks forward Matthew Riva is this year’s recipient of the Donald Sanderson Memorial Award as selected by the OHA Awards Committee and Dahna Sanderson.

The Donald Sanderson Memorial Award is presented annually to a player in the OHA that meets the criteria as set out by the Sanderson Family; Dedication; Discipline; Desire; and Deportment, and this year’s recipient, Matthew Riva (Port Robinson, Ont.) displays each of these traits in spades.

Riva, 19, completed his third full season with the Niagara Falls Canucks of the Greater Ontario Junior Hockey League (GOJHL) in 2019-20. In 49 regular season games, the forward amassed 71 points (22G/49A), which was a career-best at the Junior B level. Since joining the Canucks as an AP in 2016-17, Riva has progressed and seen his point totals increase with each passing season. In four seasons, he’s tallied 11 points, 43 points and 71 for a total of 126 points in 143 games.

Not only did Riva set personal best in points, goals (22) and assists (49) but he also picked up some accolades along the way in 2019-20. At the end of the GOJHL regular season, Riva was named the Golden Horseshoe Conference’s Player of the Year and was named to the conference’s All Star Selection Team. During the season he participated in the GOJHL Top Prospects Game where he scored a third period goal to help Team Bush prevail to a 5-4 win over Team Bignell.

In 2018-19, Riva was the recipient of the J.P. Thomas Memorial Award as Most Improved Player in Golden Horseshoe Conference and was selected to participate in GOJHL Prospects Game. Prior to joining the Canucks organization, he played Minor Midget hockey with the Southern Tier Admirals.

“Matthew (Riva) had a terrific season this year. He played in the GOJHL Top Prospects game over the Christmas Break, and then at season’s end was selected to the GOJHL Golden Horseshoe Conference All Star Team. He was second in scoring on our team, played on our top line, and was a major contributor to both our penalty-killing unit and our top-rated power play unit,” described team officials from the Niagara Falls Canucks.

Off the ice, the Port Robinson native is a full-time student at Brock University where he’s completing a degree in Honors Bachelor of Accounting Co-op Program. To date, Riva has been able to maintain an 82 per cent average. Riva says he spends most of his week focusing on school, which includes meeting assignment deadlines and going to class. He says he works hard on managing his time in order to get ahead of school responsibilities as it makes it easier for when hockey gets busy.

Niagara Falls Canucks President and Head Coach Frank Pietrangelo says Riva exemplifies leadership qualities and his peers often look to him for leadership and guidance. “He is always available for the younger players to come discuss issues or problems they might be having on or off the ice. He is the first one to arrive to a practice or game and the last one to leave. He is a true veteran and leader, even though he is only a 19-year-old,” said Pietrangelo.

“My experiences playing for the Niagara Falls Canucks and in the GOJHL have been great up to this point, and I hope that they will continue in the future. Playing in this league has allowed me to grow as a player and as a person. It has allowed me to gain a better understanding of the game and mature through my interactions with older players,” said Riva during the nomination process.

The Canucks describe Riva as a finesse player, who can skate with the best of them in the GOJHL. The club describes his speed and quickness as elite, and he is definitely a ‘game-breaker’ every time he hits the ice. “His work ethic is second to none, and he brings this to every single game or practice- leading by example,” added Pietrangelo.

Riva is also an active member of the community. On McHappy Day, he and his teammates helped raise funds by running games and selling raffle tickets in an attempt to raise awareness and support for Ronald McDonald House. Riva volunteers time at the Todd Simon Hockey School where he helps support young hockey players in their hockey development. At Todd Simon Hockey School, he runs stations on the ice and plays games at lunch with the players to make sure they are always doing something, and to ensure they always have a smile on their faces.

Congratulations to each of the nominees and to Matthew Riva of the Niagara Falls Canucks on being named this year’s recipient of the Donald Sanderson Memorial Award.

ABOUT THE DONALD SANDERSON MEMORIAL AWARD

The Donald Sanderson Memorial Award is dedicated to the memory of the late Donald Sanderson, who incurred a serious head injury in an OHA game on December 12, 2008 as a member of the Whitby Dunlops; and after a courageous battle, died on January 2, 2009. During his 21 years, 5 months and 19 days, Donald lived a passionate life. He was a player, a teammate, a coach, a teacher, a student, a loyal and caring friend and a young leader with a zest for life. And it was through his passion for life that he taught those that knew him to Live Well, Love Well and Laugh Often.

The award is presented annually to a player in the Ontario Hockey Association that meets the criteria as set out by the Sanderson Family: Dedication, Discipline, Desire, and Deportment; traits that Donald was well known for. It is very fitting that the winners of the Donald Sanderson Memorial Award should demonstrate the same qualities and characteristics. Candidates for the award must exercise a high degree of educational standard and must be enrolled in College or University. The award also provides a $1,000 bursary from the OHA.